The following is from the Hurricane Watch Net:
------
The Hurricane Watch Net will activate at 5:00 PM EDT – 2100 UTC Saturday afternoon, August 31st. Once activated, the Net will remain in continuous operation until further notice. Our frequencies of operation will be 14.325 MHz and 7.268 MHz. Operations on 14.325 MHz will continue as long we have propagation.As with any net activation, we request observed ground-truth data from those in the affected area (Wind Speed, Wind Gust, Wind Direction, Barometric Pressure – if available, Rainfall, Damage, and Storm Surge). Measured weather data is always appreciated but we do accept estimated.

------
From CQ: Please keep 14.325 and 7.268 MHz clear for hurricane-related traffic. Also, see the August issue of CQ (pages 54-55) for a comprehensive list of local and regional emergency and hurricane nets on 75, 40 and 20 meters. Avoid QRM - always listen before transmitting. 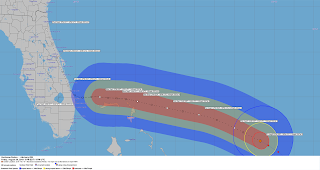 LO-94 Lunar-Orbiting Satellite Crashes Into Moon, But Not Before "Photographing" HF Radio Spectrum

Space.com and amateur radio science/technology blogger Daniel Estévez, EA4GPZ/M0HXM, are reporting that the lunar-orbiting LO-94 satellite has been intentionally crashed into the far side of the moon by its controllers. The reports indicate that the crash was long-planned as the satellite had completed its primary mission and exceeded its life expectancy, and controllers did not want to leave it in orbit as space debris.

The satellite, built by China's Harbin Institute of Technology, achieved many firsts. It was the first lunar-orbiting amateur satellite; amateurs on Earth were able to command it to shoot and send back photos from the dark side of the Moon; it recorded a total solar eclipse back on Earth and served as the platform for the first-ever repeater QSO made from lunar orbit (see July 9, 2019 CQ Newsroom post).

One of LO-94's final accomplishments, reported on the HamSci reflector, was to take a spectral "photograph" of RF energy emanating from Earth on the MF/HF spectrum. The graph published by Chinese media showed peaks just below the AM broadcast band and at roughly 9, 12 and 17 MHz. Propagation expert Carl Luetzelschwab, K9LA, added notations to the chart for the HF amateur and shortwave broadcast bands, plus WWV/WWVH, showing that most of the peaks match up with the major shortwave broadcast bands. It was noted by one member of the HamSci group that it would have been interesting to see what the graph looked like if the readings were made during a major DX contest weekend. Carl's chart is posted below.

The National Oceanic and Atmospheric Administra- tion's (NOAA's) Climate Prediction Center has issued a revised forecast for the 2019 Atlantic hurricane season, suggesting that it might be more active than originally predicted. NOAA says the El Niño pattern in the Pacific – which typically suppresses hurricane activity in the Atlantic – has ended and more named storms are now likely.

The new forecast predicts there will be 10-17 named storms, of which about half may become hurricanes, including 2-4 major hurricanes (with sustained winds greater than 110 miles per hour). Hurricane season runs through November 30, with August, September and October typically being the most active months. If you live in a hurricane-prone area, be sure that both your personal and ham radio preparedness kits are ready as needed.
Posted by CQ Newsroom at 3:44 PM

Attendance rebounded at the 2019 Dayton Hamvention®, coming in at 32,472, according to the Dayton Amateur Radio Association. That's an increase of more than 4,000 people over 2018, which had seen a decrease in attendance from 2017. Officials said their free Sunday-only admission experiment accounted for about 800 additional attendees, but consider it successful enough to repeat it next year. The idea was to give non-hams from the Xenia, Ohio, area an opportunity to see what Hamvention and ham radio are all about. According to DARA, this year's attendees came from all U.S. states and territories as well as 60 other countries around the world.
Posted by CQ Newsroom at 3:42 PM

The latest "general availability" package of the WSJT-X digital mode suite – version 2.1.0 – was ARRL Letter also reports that the new package includes other bug fixes and general improvements, including an upgrade to FT8 waveform generation, improved user interface, rig control and contest logging features. As with other major updates to WSJT, users are strongly encouraged to install the new version and stop using previous ones, including "release candidate" versions. The new version of WSJT-X may be downloaded from <https://tinyurl.com/y2tg2fwp>, along with the user guide in several languages.

released in mid-July and includes the new FT4 mode as "a finished protocol for HF contesting," according to the WSJT Development Group. The

On a related note, the ARRL reports that Logbook of the World has been updated to permit FT4 contacts to count for it Digital Worked All States award. According to the ARRL Letter, "(n)o additional endorsements are under consideration at this time."
Posted by CQ Newsroom at 3:39 PM