We weren't aware that federal agencies routinely design new seals whenever they move their offices, but apparently that's the case with the FCC, which introduced a new emblem "(i)n anticipation of (its) upcoming move" to a new headquarters. The date of the move is uncertain due to COVID-19, but over the coming months, the agency will be spending our tax dollars to "incorporate the new seal on official stationery, business cards, publications, and other materials," the FCC said in a public notice. 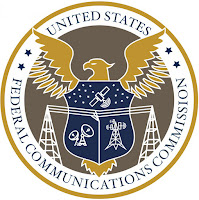 In case you were wondering, the Commission says the new seal incorporates four elements:

By our count, there are four additional emblems/seals currently in use by the FCC. It isn't clear which, if any (or all?) might be replaced by the new one.
Posted by CQ Newsroom at 7:49 AM