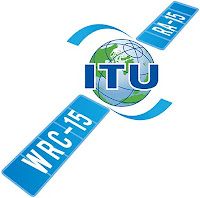 The next international World Radiocommunication Conference (WRC) won't be held until 2015, but the Administrative Council of the International Amateur Radio Union (IARU) is already beginning to get ready, issuing a paper outlining the several agenda items that might affect amateur radio.

Among them, according to "Newsline," are several proposals for increasing frequency allocations for mobile and satellite services which might eat away at some amateur allocations, as well as a proposal to give amateur radio a new secondary allocation worldwide between 5.25 and 5.45 MHz.

This is the 60-meter band, already authorized for secondary amateur use in several countries, including the United States. But these allocations have been made by each country and the proposed agenda item would include amateur radio as a permitted use worldwide.
Posted by CQ Newsroom at 1:54 PM