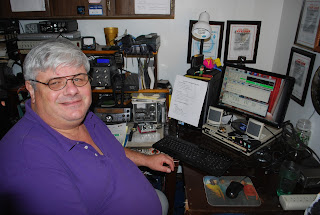 Ochu is a recently-retired high school English teacher and ham radio license instructor. A ham since 1974, he has held an Extra Class license since 1982. His ham radio interests include DXing, antennas, VHF/UHF/SHF, RTTY and contesting, but notes that "nothing beats a good, down to earth ragchew with a fellow ham." In addition to ham radio, Ron enjoys photography, reading and spending time with his grandchildren. His wife, Debbie, is KC9ULA.

CQ Editor Rich Moseson said, "I am looking forward to working with Ron. His wide-ranging interests and experience both as a teacher and in working with new hams should be just the right formula for the 'Learning Curve' column, which is aimed both at new hams and at more experienced hams learning new aspects of the hobby."

"My hope is to encourage readers to discover and to experience, first hand, the many many avenues for growth and personal satisfaction that our hobby makes available," said Ochu. "I hope that my passion will be evident and perhaps even a little contagious!"