EO-88 On Air With Message From Dubai's Ruler 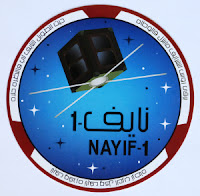 Emirates-OSCAR 88 - the United Arab Emirates' first amateur radio satellite, is in orbit and on the air. Previously designated as Nayif-1, the nanosatellite was one of a record 104 satellites launched on a single rocket from India on February 15.


Prior to beginning regular service, the satellite transmitted a pre-recorded message from Dubai's ruler and United Arab Emirates Prime Minister Sheikh Mohammed bin Rashad. The message, in Arabic, says, "The renaissance of peoples, nations and civilizations starts with education; and the future of nations starts at their schools."
Posted by CQ Newsroom at 2:14 PM