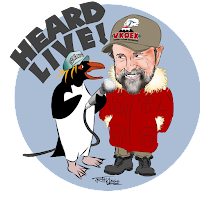 Tom Medlin, W5KUB, scored what is believed to be an amateur radio first, conducting a live video chat via satellite with Bob Schmieder, KK6EK, from the site of the VK0EK Heard Island DXpedition for his "Amateur Radio Roundtable" podcast. The first effort on March 22 resulted in only an audio connection, since the team was still on board the ship taking them to the island. A video link was successful (although quality was poor) on the March 29 edition of the program, and viewers could see various operating positions inside the station tent. Bob planned to try again with a better camera on April 5. (CQ Editor Rich Moseson, W2VU, was also a guest on the March 29 program.)


One of the topics Bob discussed during the Amateur Radio Roundtable interview was the high level of cooperation between the VK0EK expedition and the simultaneously running FT4JA operation from Juan de Nova Island. Bob said the two teams coordinated their frequencies and agreed that FT4JA would listen for calls above its transmitting frequencies while VK0EK would listen below its transmit frequency. It was hoped that these arrangements would separate the pileups and minimize interference between hams trying to contact the two DXpedition stations.
Posted by CQ Newsroom at 11:14 AM