The following is from our friends at the Hurricane Watch Net. Please keep the net frequencies clear when thenet is active:

The Hurricane Watch Net will activate Wednesday morning at 8:00 AM CDT (1300 UTC) on our primary frequency of 14.325.00 MHz. Beginning at 4:00 PM CDT (2100 UTC), we will begin simultaneous operations on 7.268.00 MHz. Once activated, we will remain in continuous operation on both frequencies until the bands close. We will resume operations on those bands just as soon as propagation returns.

Once Laura has been downgraded to a Tropical Storm, we will focus on helping to gather any post-storm reports from the areas that had been hit. This includes the relaying of any emergency or priority traffic.
As always, we welcome your observed ground-truth data from those in the affected area. Information that the forecasters at the National Hurricane Center need includes Wind Speed, Wind Gust, Wind Direction, Barometric Pressure – if available, Rainfall, Damage, and Storm Surge. Measured weather data is always appreciated but we do accept estimated.We are also available to provide backup communications to official agencies such as Emergency Operations Centers, Red Cross officials, and Storm Shelters in the affected area. We also collect and forward significant damage assessment data to FEMA officials stationed in the National Hurricane Center.As always, we are praying and hoping for the best yet preparing for the worst.Sincerely,Bobby Graves – KB5HAVNet ManagerHurricane Watch Net

The National Oceanic and Atmospheric Administration revised its prediction for the 2020 hurricane season in early August, calling the new forecast "one of the most active seasonal forecasts that NOAA has produced in its 22-year history of hurricane outlooks."

The revised forecast now calls for 19-25 named storms (the average is 12), with one forecaster at the Climate Prediction Center saying that "we expect more, stronger and longer-lived storms than average" this year, and that the likelihood of an above-average Atlantic hurricane season is now 85%.

At our deadline in August, there had already been nine named storms, a threshold that typically isn't reached until early October. The Atlantic hurricane season runs through November 30.

The ARRL's board of directors, meeting virtually in July, approved the final recommendations of its Band Planning Committee for a revised HF band plan, according to the ARRL Letter. Many of the proposed changes will require FCC action on a variety of already-submitted proposals, including one calling for Technician Class voice privileges on 80, 40, and 15 meters. The bulk of the proposed changes, however, are to permit greater use of wideband digital modes and automatically-controlled digital stations (the technical term for stations using Winlink radio e-mail). Specifics of the recommendations are available online at <https://tinyurl.com/y5ht9eqc>.
Posted by CQ Newsroom at 1:04 PM

Loss of Part of 9-Centimeter Band Now a Virtual Certainty

The FCC last year proposed removing current users from the 3.3-3.5 GHz band (9 centimeters) in order to

open up spectrum for 5G wireless services, as part of its imple- mentation of the MOBILE NOW Act passed by Congress in 2018. While the Commission has yet to issue a Report and Order on that Notice of Proposed Rule Making (NPRM), it now appears that the loss of at least the 3.45-3.5 GHz segment is a near-certainty. Amateur radio is secondary to the federal government on the 9-centimeter band, and the White House announced on August 10 that, in collaboration with the Defense Department, frequencies from 3.45-3.55 GHz would soon be available for 5G network use. According to FCC Chairman Ajit Pai, this will constitute the lower end of a 530-MHz-wide 5G band extending from 3.45-3.98 GHz.

Since the FCC has not yet acted on the 9-centimeter band NPRM, the fate of the amateur allocation at 3.3-3.45 GHz – including an international amateur satellite segment at 3.40-3.41 GHz – is unclear at this time.

Preliminary numbers indicate that the virtual ham expo sponsored by the QSO Today podcast on August 8 and 9 was a success. According to organizer Eric Guth, 4Z1UG, the day after the event, more than 26,000 people around the world registered for the two-day event and more than 14,000 attended each day.

CQ was well-represented there with a rotating roster of staff members, columnists, award managers and contest directors, all chatting with visitors and answering questions. At times, there were more than 100 visitors at our booth at one time.

The Reverse Beacon Network (RBN) will be adding 15 new nodes, using grants from the Yasme Foundation and Amateur Radio Digital Communications (ARDC). According to the ARRL Letter, the nodes will be installed in areas where there is a need for more reception reports on band conditions and where reports will have scientific value for propagation research. Siting advice is being offered by researchers associated with HamSCI. 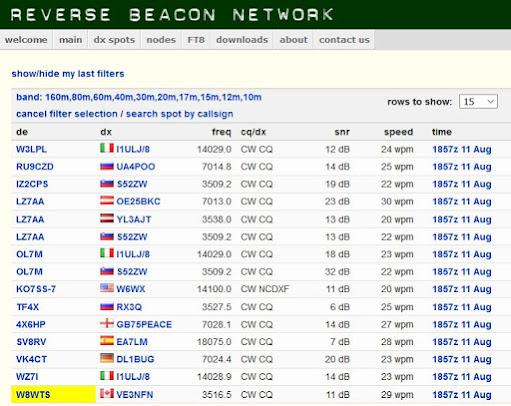 RBN automatically collects call signs and signal strength readings from stations monitored at various locations around the world. These reports are then posted on a website where the user can see where his/her signals are being heard. The list of additional locations had not been finalized as of press time.