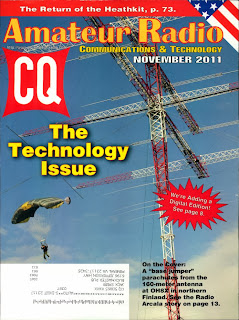 The massive 330-foot tower supporting the 160- and 80-meter Yagis at Radio Arcala's OH8X contest station in Finland collapsed under high winds in an early December storm that left some 200,000 families in the country without power. The 3-element 160-meter beam was reportedly the world's largest amateur radio antenna.

According to the ARRL Letter, group spokesman Jarmo Jaakola, OH2BN, speculated that the automation designed to enable the array "to find its most comfortable position in high winds" may have locked up and caused the structure to corkscrew. Jaakola said the tower - featured on the cover of the November 2011 cover of CQ - collapsed "peacefully" and caused no damage to any people or surrounding structures. At press time, inspectors were still trying to determine the exact cause of the failure.
Posted by CQ Newsroom at 1:25 PM