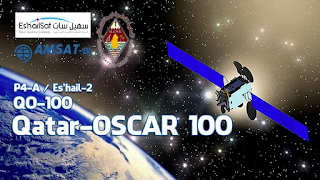 The challenge: QO-100 is a geostationary satellite over Africa whose “footprint” also includes most of Europe, and parts of Asia and South America. According to ANS, the most likely operating location from North America would be St. Johns, Newfoundland, which has a calculated viewing angle to the satellite of -0.9 degrees elevation. Being below the horizon, it is expected that tropospheric ducting will be required for the first few miles. An Indonesian amateur has already proven that it can be done, operating through QO-100 from an elevation angle of -1.2 degrees.