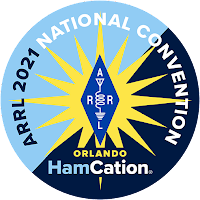 Planning is under way for major ham radio events in 2021, despite continued uncertainty over the course of the coronavirus pandemic and restrictions associated with it. Both ARRL and the Orlando Amateur Radio Club are hoping that large gatherings will again be permitted by the time of next year's Hamcation in mid-February. ARRL has announced that the Orlando event will also be its 2021 national convention. Hamcation 2020 was the last big ham event held prior to the shutdowns resulting from COVID-19.

Organizers of the International DX and Contesting Convention, normally held in Visalia, California, have decided that their 2021 event will be held online and span two "3-day weekends" in April. According to the ARRL Letter, next year's "Virtual Visalia" will be held from April 16-18 and April 23-25, with no duplication of forums or other activities.

The Dayton Hamvention is hoping that we'll all be able to get together in person again next May in Ohio. The Dayton Amateur Radio Association announce in June that Rick Allnut, WS8G, and Jim Storms, AB8YK, have been named 2021's General Chairman and Assistant General Chairman, respectively.
Posted by CQ Newsroom at 1:42 PM