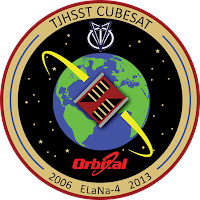 This month is prime time for tiny satellite launches, many of which will use the ham bands for communications or telemetry. A November 19 launch from Virginia sent 29 satellites into orbit, including TJ3Sat, the first satellite designed and built by high school students. TJ3Sat includes an amateur radio component (see <http://www.tjhsst.edu/students/activities/tj3sat/>).

A launch scheduled for November 21 from Russia was to send up another two dozen-plus "cubesats," tiny satellites that have become very popular among schools and hams alike. The ham radio "star" of the November 21 launch is FUNcube, a joint project between AMSAT groups in the United Kingdom and the Netherlands (see <http://funcube.org.uk/>).

In addition, four cubesats carrying ham radio payloads were planned to be deployed from the International Space Station on November 25. (ARRL and AMSAT News Service)
Posted by CQ Newsroom at 8:33 AM