OSCAR-7 Back On the Air Again 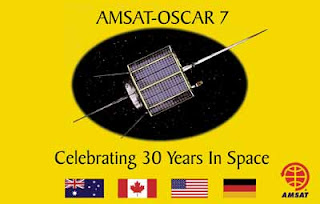 AMSAT-OSCAR 7, launched nearly 40 years ago and silent between 1981 and 2002, is back on the air after going through a period of eclipse. The satellite's batteries are long dead but when it is in sunlight, its solar panels power the equipment back on. According to the ARRL Letter, the most recent eclipse period ended in early August. It varies between operating in Mode A (2 meters up and 10 meters down) and Mode B (70 centimeters up and 2 meters down).
Posted by CQ Newsroom at 2:33 PM