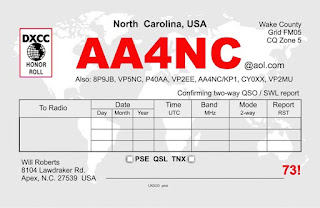 William "Will" Roberts, AA4NC, of Apex, North Carolina, was killed October 21 when a small plane he was piloting crashed soon after takeoff. Both Newsline and the ARRL Letter report that Williams was an active contester, DXer and DXpeditioner as well as a musician and a licensed commercial pilot. He competed in the first WRTC in 1990 and returned as a judge for the 2018 competition in Germany.

One passenger on the plane was also killed; two children aboard were treated for injuries and are expected to survive. A spokesman for the National Transportation Safety Board told Newsline that it is too early in its investigation for a cause of the crash to be known and that it will likely be a year or more before the investigation is complete.