ARRL On Board With Two Draft FCC Positions for WRC-23 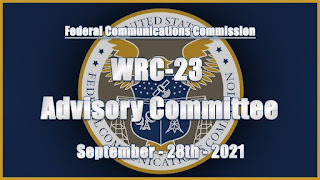 The ARRL is in agreement with two draft positions developed by the FCC's WRC Advisory Committee in advance of the next World Radiocommunication Conference in 2023. According to the ARRL Letter, the League concurs with the committee's preliminary position on two agenda items, one regarding VHF frequencies for the Earth Exploration Satellite Service and the other dealing with space weather sensors.

The first proposal deals with spaceborne radar sounders proposed for a secondary allocation on 40-50 MHz. The FCC committee studying the possibility of such an allocation and the ARRL agrees, as long as there are "adequate means to protect the weak-signal operations of the Amateur Radio Service on the adjacent 50-54 MHz band without imposing any restraint on those operations."

The League also agreed with the committee's draft position on a proposal regarding space weather sensors which calls for completing comprehensive studies on the possible impact to incumbent services before considering any changes to the international Radio Regulations.