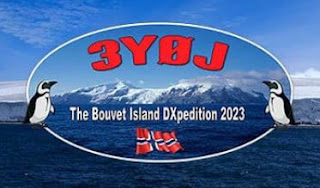 There's bad news, good news and growing confusion on the long-planned (but currently cancelled) 2023 DXpedition to Bouvet Island. There are now three separate groups planning trips to the subantarctic island, including one that split off from the original group (but holds the 3Y0J license) plans to make the trip in 2022 and another that says it's ready to go later this year.

We reported last month that the Intrepid DX Group was working to figure out a way that Nigel Jolly, K6NRJ, could continue to be captain of the Braveheart even though he had to sell the charter vessel because of Covid cancellations. Apparently, that didn't work out, but the ARRL reported in early August that the group had found a "suitable and affordable" vessel whose captain was willing to make the trip to the sub-antarctic island. The new team of up to 12 operators will be led jointly by David Jorgensen, WD5COV, and Kevin Rowett, K6TD.

Meanwhile, Ken Opskar, LA7GIA - who holds the 3Y0J license to operate from the Norwegian island - apparently has split off from the Intrepid DX Group and formed a separate group that is now planning a 2022 visit. Plus, Polish DXpeditioner Dom Grzyb, 3Z9DX, says he has secured a license for 3Y0I and has put together a group to activate the island later this year.