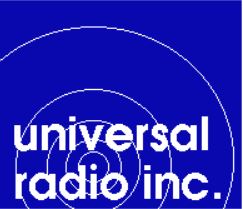 Another major hobby radio retailer has closed its doors. Universal Radio owners Fred (N8EKU) and Barbara (KC8VWI) Osterman announced in late November that they had decided to retire and to close their retail location in Worthington, Ohio, as of November 30.

The announcement said that the Universal website - <www.universal-radio.com> - would remain active "for the foreseeable future" in order to fulfill existing orders and sell off existing inventory. Universal has been the leading source for shortwave receivers in addition to its line of amateur radio gear and accessories.