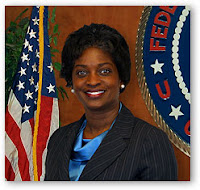 The U.S. Senate has confirmed President Obama's re-nomination of Mignon Clyburn as an FCC Commissioner. It will be her first full five-year term. Clyburn was initially appointed in 2009 to fill an unexpired term. Calling her re-appointment "an extraordinary honor," Clyburn said she was "humbled" by the Senate's confirmation. Her appointment is retroactive to June, 2012, when her initial term expired.
Posted by CQ Newsroom at 2:08 PM