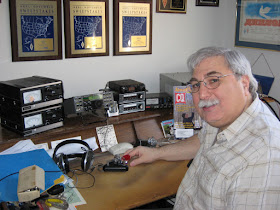 Zwiebel is the longest-serving member of the CQWW Contest Committee, having first joined in 1979. He brought the contest into the computer age by writing the first mass log-checking program (using Business BASIC) in 1980, and has devoted thousands of hours of volunteer time to the contest community. Doug was also responsible for suggesting the establishment of the CQ Contest Hall of Fame in 1986.

First licensed in 1966, Zwiebel began contesting a year later and has never stopped. Over the years, he has operated at some of the nation's top contest superstations, including K2GL (where he was chief 10-meter operator for a decade), K5NA and N2RM. He has operated primarily low power from his home station and holds six CQWW QRP records, more than any other active station. He also holds DXCC Honor Roll #1 and has worked more than 250 DX entities using less than one watt of transmitter power.

Professionally, Zwiebel is a hospital administrator in New York City. He and his wife live in Randolph, New Jersey. They have two adult daughters, both of whom are doctors.

CQ Publisher Dick Ross, K2MGA, said Zwiebel brings a unique perspective to the table. "Doug has operated from some of the world's top contest superstations as well as single-operator QRP," Ross noted. "So he understands equally well the perspective of both the 'big guns' and the 'little pistols,' without whom the contest could not be nearly as successful as it is. I look forward to working closely with Doug."
CQ Newsroom at 7:59 AM
Share
‹
›
Home
View web version